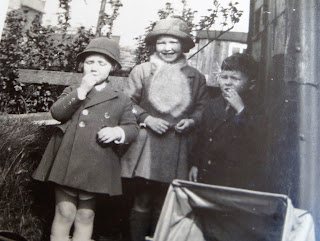 "That was taken at my grandmother's house. She was Jean --Jeanie. Mum's name was Annie, and she hated it, she hated the Annie, so she changed it to Anne and it stuck. She was called after her Aunt Annie."

"Grannie had a wee greenhouse at the back, you know - a wee lean-to against the wall at the lane. Oh, I used to go up the hill at Darvel, what we called the Pond Brae --there was two ponds for curling and skating right up the top-- I used to go up to get tomato plants for my grannie. There was a nursery up there -- little thinking of my future with greenhouses and tomato plants!"

"These two were my mum and dad. That's when they were on their world tour -- they were away for about six months. I stayed with grannie."

"Now that was Prestwick shore. We came down to there for a month in the summer. We stayed in a hotel beside the station, near the golfcourse. That's me walking down the golfcourse side with an ice-cream. Now that doll came from Japan. It had a wee stand. And those dresses were from when we had dancing displays [at school]."

"We had picnics at Loudon Hill. Can you see my wee dog there? A wee black scotty dog called Exya. I called her that because she was born on the day of the Glasgow Exhibition opening. She was a lovely dog."

"That's Dickie - she was the head girl of the school --Great Moreton. Her cat was called Tito, after the Yugoslav president at the time. That's Mirelle, Jessie and myself --we were all around sixteen. I was wearing my winter coat from Great Moreton. It was a big country house. It had been made into a school. I went there from Wellington in 1944; I was there for two years. It was a nice school. But shortly after I'd left, Mrs Butterworth moved the school to Robie Hall. There's a big picture upstairs of the whole school. There was a tower, and the last year, four of us slept in the tower, and nobody bothered us because there was quite a narrow stair to come up. There was an empty room above us, and we would sit up there and smoke --and the odd glass of sherry!"

"Old Moreton Hall is a National Trust building now. On a sunday the prefects were allowed to walk across the fields to have afternoon tea in the dining room. When the rising bell went we had to get up and ring a bell around the dormitories to get all the other little horrors up. It was an actual bell --a handbell."

"Once we had a 'spider dance' --don't ask me why it was called that-- in a part of the building round the corner from the entrance, and the headmistress was asked, probably the last term we were there. We were all walking back round the path...this bedroom window went up and Ms Paton the maths teacher, she called out: "Girls! What are you doing up at this time of the night?" And a small voice was raised from the middle of the crowd: "It's alright, Ms Paton. I am with the girls." It was Ms Butterworth [the headmistress]. And SLAM, down went the window. She cracked the glass! I don't think we were very popular with Ms Paton after that..." 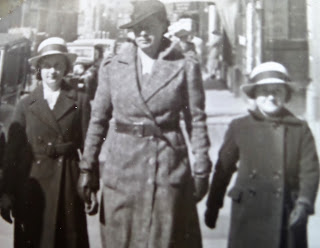 "That's Margaret Macfarlane and me, and Ms Jeffrey from Wellington. She was an awful clever girl. Anything she touched, she was good. That must have been before I left Wellington. We were doing our Saturday shopping in Ayr, but we had to have a teacher with us."
Posted by Becca McCallum at 20:41 2 comments:

Becca McCallum
Once upon a time there was a little girl who wanted to write. She made wonderful beginnings and then let them languish in notebooks and boxes underneath the bed and tucked away at the backs of drawers. They piled up, word upon word, getting all smudgy and dog-eared and sad. Beginnings don't like to be left alone, so this is my lumber room for all the things I'm working on. Be prepared for things to be a little dusty. Comments much appreciated, especially if you don't like something I've written. Tell me why, that'd be great. If you liked it, that'd be good too.