granny came to meet us - stories from my grandma's photo album 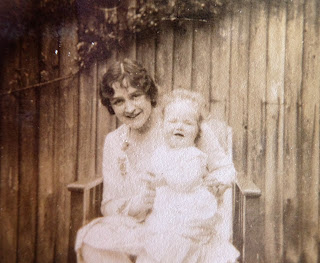 "Mum started that [photo] album for me when I was knee high to a grasshopper. I don't know who that first one is, on the beach. I never got around to asking gran...your great gran."

"That's Lizzie the maid, and me. That's me and my grandmother - at grannie's back door. I still have that pram cover; used by all of our three, and you. These were all taken at grannie's back door in Darvel. We stayed with granny for a while. I don't know much more about Lizzie. We had her with us for quite some time. She came to help more or less with me. She was a maid and she was my nanny. Maids in those days all wore uniforms, like that. If you were a maid in a house, that was your uniform." 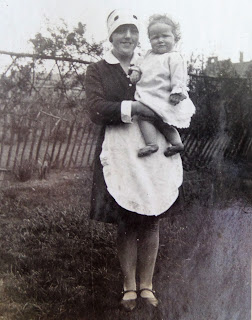 "I never knew my grandfathers: my grandfather or my step-grandfather. That's why...my granny had two names...she was Mrs More, and then she was Watthews. He came from Nottingham actually, from the lace industry. And in those days...I think he wanted my grandmother as a sort of housekeeper to live in, and in those days a lady didn't stay with a gentleman unless they were married - so they got married!"

"This one's in Hendon, 1929. I was one then. I can still remember the name of the house in St Albans - that's it there: Tregenna. That's a clothespole with a kangaroo tied to it - a plastic kangaroo. I don't know why - probably my toy. I couldn't tell you how long we stayed there for, probably about a year."

"That's on the beach in San Francisco. We had to wear sunhats, oh yes, everyone wore hats. The girl is June Prince - she was the daughter of some friends' of my parents in San Francisco. She looked after me, oh she was a good bit older than me obviously." 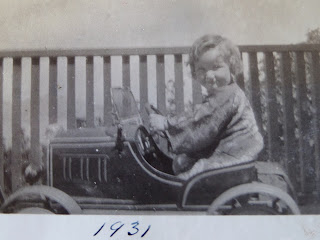 "That's the patio of the house in Sausalito. And that was the garden. Yes, I had a [peddle] motorcar! That was my motorcar. I think it was green. That was a lovely pram, the wicker one. Dimples was an American doll. I must have been about two years old when I got her. When we came back from America, we got off the train at Kilmarnock...Granny came to meet us. The porter handed Dimples out the train and granny was quoted as saying, "Annie never telt me about this yin!" She thought there was another [child] she didn't know about." 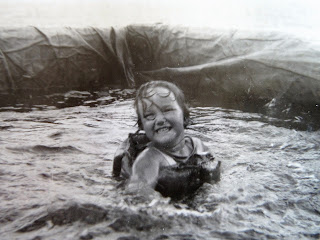 "That was when we were coming home on a boat called the Annie Johnson, crossing the carribean sea. And that was me in the swimming pool on board. Not like the posh ones you have nowadays. There's a picture of me with two sharks in the background, which the captain said had to be overboard by the following morning. I don't know who caught them - one of the crew probably. That's the purser with me. I'm chewing a sweetie in my cheek -probably he gave me a chewy caramel." 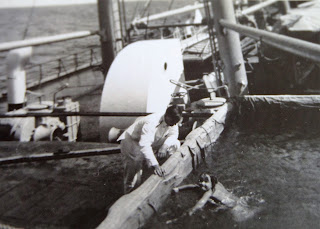 "I'll tell you something. I loved that pool. They would come to get me out, and I'd paddle over to the other side - I was naughty! The pool was about 6 feet deep, I couldn't touch the bottom. I don't know where my mother was, but probably the purser came and got me out - eventually!"

"That's the garden at granny's house, and that's the factory behind the greenhouse, the lace factory. My grandfather was a lace designer. I used to go into the factory, nip up the stairs to his room -he had his own office- and he would fling me a bit of the special squared paper saying, "Draw me a design, Jean." And I had a great time colouring." [Jean McCallum, March 2016]

Becca McCallum
Once upon a time there was a little girl who wanted to write. She made wonderful beginnings and then let them languish in notebooks and boxes underneath the bed and tucked away at the backs of drawers. They piled up, word upon word, getting all smudgy and dog-eared and sad. Beginnings don't like to be left alone, so this is my lumber room for all the things I'm working on. Be prepared for things to be a little dusty. Comments much appreciated, especially if you don't like something I've written. Tell me why, that'd be great. If you liked it, that'd be good too.